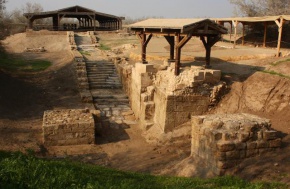 Bethabara (translated from the Hebrew as “a place of crossing"), is called as well Bethany beyond the Jordan - is located at the Jordan River. Two very important events of the Old Testament happened here: the crossing of the Jordan River by the Israelites led by Joshua on dry ground (water parted before them) after forty years of wandering in the desert to the Promised Land (Joshua 3, 14-17) and taking the holy prophet Elijah by God in a fiery chariot to heaven (4 Sam. 2, 4-11).

The events of the New Testament, such as the preparation of the Savior way through the preaching of the Good News from John the Baptist also took place here revelation of Jesus Christ through baptism (John 1: 28) happened here too. In the same area “beyond the Jordan “Jesus Christ returned, when the Jews decided to kill him at the feast of sacrifice (Jn. 10, 39-42). Mary of Egypt has chosen this desert to repent her sinful life by asceticism, fasting and prayer.

In the 90s of XX century on the east bank of the Jordan River international team of archaeologists discovered (with help of ancient mosaics of Madaba, map of the Holy Land from the sixth century) the ruins of a Byzantine church and the foundation of Greek columns - authentic place of Revelation of Lord. Studies have shown that for seven centuries (from the beginning of the fifth to the seventh century), five different Christian churches successively exchaged in this place. The first temple was built at the time of Emperor Anastasios (491-518) on special 6 meters high arches to avoid damage during the floods of the Jordan. The skeleton of a stone chapel was found in the place where Jesus Christ took off his robe before going into the water.

Here you can see many monuments of Byzantine churches ruins from IV - VII century, the ruins of a chapel at the site of the Baptism of  Jesus Christ. Nearby there is a spring of St. John the Baptist and Byzantine monastery of Our Lady (Mary of Egypt). There is also the hill of St. Elijah, where he ascended to heaven in a fiery chariot. There is also a cave revered as the home of the prophet Elijah and John the Baptist. Around the hotel there are many newly built churches such as the Rome Catholic, Armenian, Evangelical Lutheran, Greek Orthodox monastery and the Greek Orthodox Church of St. John the Baptist. In the near future such churches as: Syrian Orthodox, Coptic Ethiopian, Georgian orthodox, Arabic and Anglican will arise there.