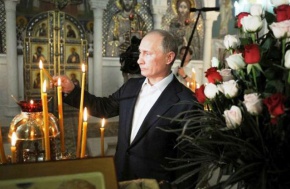 The opening of the complex, which became known as The Russian Pilgrim's Residence on Jesus Christ's Baptism site in Jordan, was held June 26, 2012 during the official visit of Russian President Vladimir Putin to the Middle East. The Church of the Residence was sanctified by Patriarch of the Holy City of Jerusalem and All Palestine Theophilos III, who was assisted by the Head of Moscow Patriarchate Office for Institutions Abroad, Archbishop Mark of Yegoryevsk.

Today the residence invites guests who wish to stay in this holy place. The hotel includes everything, modern pilgrims may need: beautiful church, refectory, car parking. Two descents to the Jordan River for small and large groups are available, so a rite of blessing the water may be celebrated right on the beach. Likewise, even large pilgrim groups may dip comfortably into the Jordan River.