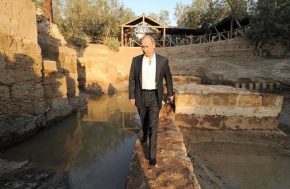 In July 2006, by the personal initiative of His Majesty Jordan’s King Abdullah II Ibn Al Hussein, it was decided to provide Russia a piece of land in the Jesus Christ Baptism Site reserve for the construction of the pilgrimage center. In February 2007, a plot of land of 10 hectares was officially handed over by Hashemite Kingdom of Jordan to the Russian government in perpetuity and free of charge use. The ceremony was attended personally by Jordan's King Abdullah II and Russian President Vladimir Putin.

The hotel construction was launched soon and upon its completion the entire Pilgrim's Residence complex with all its lands and buildings was handed over for the free use of the Russian Orthodox Church in order to organize pilgrimage tours and host the tourists.

The opening of the complex, which became known as The Russian Pilgrim's Residence on Jesus Christ's Baptism site in Jordan, was held June 26, 2012 during the official visit of Russian President Vladimir Putin to the Middle East. The Church of the Residence was sanctified by Patriarch of the Holy City of Jerusalem and All Palestine Theophilos III, who was assisted by the Head of Moscow Patriarchate Office for Institutions Abroad, Archbishop Mark of Yegoryevsk.