The most beautiful places in Jordan 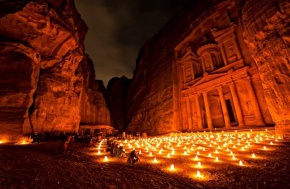 The Treasury is the most celebrated monument at ancient Petra – a magnificent site that was voted as being one of the New Seven Wonders of the World. Carved in the 1st century B.C. for an important Nabataean king, the enormous facade draws its artistic influences from ancient Alexandria and is breathtaking in its scale and grandeur. Famously called the ‘rose-red city half as old as time’, Petra’s coloured rocks are among the world’s most impressive treasures.

No one can sink in the Dead Sea’s saline waters which have a salt content ten times higher than the Mediterranean. Said to have been visited by Queen Cleopatra, the Dead Sea is the world’s oldest natural spa, and is situated at more than 360 metres below sea-level. The Dead Sea region offers luxury accommodation complete with extensive spas, and is an ideal place to spend a few days following your tour.

This Monastery is located on a hill overlooking the Holy Land and is believed to be the burial place of Moses. The custodians of the monastery are Franciscan monks most notable of whom is Father Picirillo, an archaeologist who has written many books on the history and archaeology of the Holy Land. It contains some of the most impressive mosaics in the world.

The bustling Ottoman period town of Madaba is noted for its exquisite Byzantine mosaics. St. George’s Church houses a famous 6th century mosaic map, while the Madaba archaeological park preserves a number of recently discovered masterpieces including the fantastic mosaics from the Church of the Virgin and the Hippolytus Hall. The Church of the Apostles, at the southern entrance to Madaba, contains the Personification of the Sea mosaic, one of the town’s most beautiful.

The lovely Hammamat Ma'in is another favoured spot with a hot waterfall, thermal mineral springs and a full compliment of resort facilities. It lies south west of Madaba, 60 Km from Amman. People have gone there for thermal treatments-or simply to enjoy a hot soak-since the days of Rome. What better way to end a day immersed in history than in a wonderful, naturally warm bath! If you are in search of a bit of adventure you can take a guided hike down to the Dead Sea through pools of hot water!

The mountaintop fortress, now called Mukawir, commands panoramic views over much of the Dead Sea and the hills of Palestine and the Holy Land. It was here that Herod Antipas imprisoned John the Baptist, and later had him beheaded after Salome's fateful dance.

Amman the capital is a modern, safe, and friendly city. No more than a five hour drive from anywhere in the country, it is a convenient place to base your tour from. Known as Rabbath-Ammon during prehistoric periods and later as Philadelphia, the ancient city that was once part of the Decapolis league, now boasts a population of around 1.5 million. Often referred to as the white city due to its canvas of white stone houses, Amman offers a variety of historical sites including the Citadel and the magnificent Roman Theatre. Amman also contains an impressive array of restaurants, bars and shopping areas.

Jerash is one of the most beautiful and best-preserved Roman cities in the Middle East. Ancient Gerasa came to prominence during Hellenistic times, but her golden age was in the 2nd and 3rd centuries A.D; a time when the city was graced by a visit from the emperor Hadrian. The modern visitor will find complete theatres, extensive wheel rutted colonnaded streets, an enormous Triumphal Arch, and a Hippodrome where Roman Army, Gladiatorial, and Chariot Racing re-enactments take place.