(Hebrew: יָם הַ‏‏מֶּ‏‏לַ‏ח, Yām HaMélaḥ, "Sea of Salt", also Hebrew: יָם הַ‏‏מָּוֶת, Yām HaMā́weṯ, "The Sea of Death"; Arabic: البحر الميت‎ al-Baḥr al-Mayyit), also called the Salt Sea, is a salt lake bordering Jordan to the east, and Palestine and Israel to the west. Its surface and shores are 427 meters (1,401 ft) below sea level.  Earth's lowest elevation on land. The Dead Sea is 306 m (1,004 ft) deep, the deepest hyper saline lake in the world. With 34.2% salinity (in 2011), it is also one of the world's saltiest bodies of water. It is 9.6 times as salty as the ocean. The Dead Sea is 50 kilometres (31 mi) long and 15 kilometers (9 mi) wide at its widest point. It lies in the Jordan Rift Valley, and its main tributary is the Jordan River.

The Dead Sea has attracted visitors from around the Mediterranean basin for thousands of years. Biblically, it was a place of refuge for King David. It was one of the world's first health resorts (for Herod the Great), and it has been the supplier of a wide variety of products, from balms for Egyptian mummification to potash for fertilizers. People also use the salt and the minerals from the Dead Sea to create cosmetics and herbal sachets.

The Dead Sea seawater has a density of 1.240 kg/L, which makes swimming similar to floating.

Dwelling in caves near the Dead Sea is recorded in the Hebrew Bible as having taken place before the Israelites came to Canaan, and extensively at the time of King David.

Just north of the Dead Sea is Jericho. Somewhere, perhaps on the southeastern shore, would be the cities mentioned in the Book of Genesis which were said to have been destroyed in the time of Abraham: Sodom and Gomorra (Genesis 18) and the three other "Cities of the Plain", Admah, Zeboim and Zoar (Deuteronomy 29:23). Zoar escaped destruction when Abraham's nephew Lot escaped to Zoar from Sodom (Genesis 19:21-22). Before the destruction, the Dead Sea was a valley full of natural tar pits, which was called the vale of Siddim. After when God destroyed Sodom and Gomorra Lot went with his daughters to one cave. Now the cave in which Lot and his daughters hid has been discovered; or rather in the 5th and 6th centuries AD, a cave was located, which was deemed to be Lot’s cave, and a monastery was built around it.  This monastery has now been discovered with some very fine mosaic pavements, with interesting inscriptions. However, part of the monastery overlay the cave and the archaeologists entered the cave and excavated under the floor. There, to their surprise, they discovered some Middle Bronze Age pottery of precisely the right period for the destruction of Sodom and Gomorra.

In Ezekiel 47:8-9 there is a specific prophecy that the sea will "…be healed and made fresh", becoming a normal lake capable of supporting marine life. A similar prophecy is stated in Zechariah 14:8, which says that "Living waters will go out from Jerusalem, half of them to the eastern sea (likely the Dead Sea) and half to the western sea (the Mediterranean)..."

The Dead Sea area has become a major center for health research and treatment for several reasons. The mineral content of the water, the very low content of pollens and other allergens in the atmosphere, the reduced ultraviolet component of solar radiation, and the higher atmospheric pressure at this great depth each have specific health effects. For example, persons experiencing reduced respiratory function from diseases such as cystic fibrosis seem to benefit from the increased atmospheric pressure.

The region's climate and low elevation have made it a popular center for several types of therapies:

Treatment for psoriasis: Climatotherapy at the Dead Sea is an effective therapy for patients with psoriasis, who benefit from sunbathing for long periods in the area due to its position below sea level and subsequent result that many of the sun's harmful UV rays are reduced.
Treatment for rhinosinusitis: Rhinosinusitis patients receiving Dead Sea saline nasal irrigation exhibited significantly better symptom relief compared to standard hypertonic saline spray.
Treatment for osteoarthritis: Dead Sea mud pack therapy has been suggested to temporarily relieve pain in patients with osteoarthritis of the knees. According to researchers of the Ben Gurion University of the Negev, treatment with mineral-rich mud compresses can be used to augment conventional medical therapy. 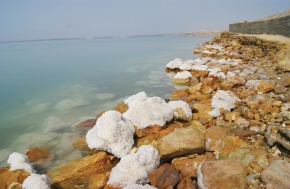 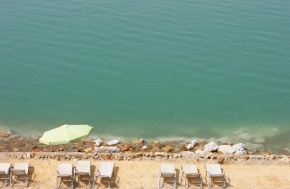 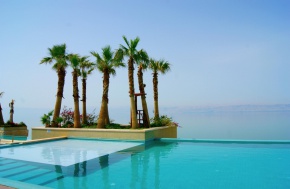 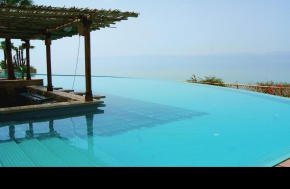 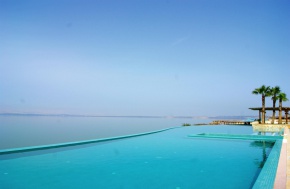 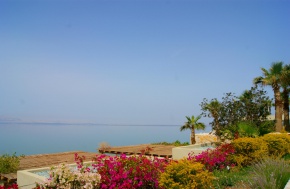 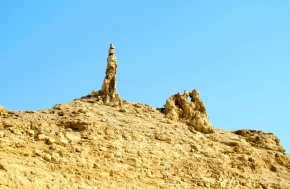 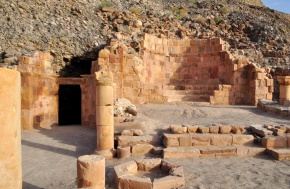